Under the instruction and financial support of the Ministry of Economy, Trade and Industry (METI), the Energy Conservation Center, Japan (ECCJ) invited 10 trainees from Russia (consisting of Moscow State government officials and private enterprise workers) to Japan during the five days between October 23 and 27, 2017 and implemented a training program relating to building energy conservation, which is a main objective of Russian energy conservation policies. 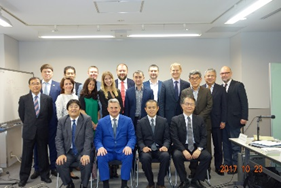 The objectives of the training were as follows. 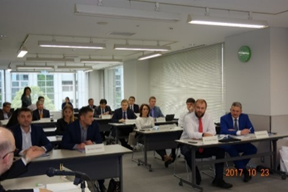 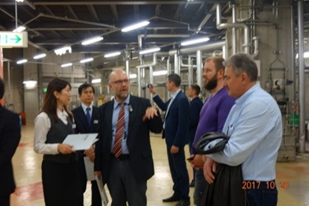 In addition, detailed lectures were given regarding the building energy conservation standards during construction in cold weather regions of Japan (mainly the Hokkaido region) and energy conservation technologies applied in actual buildings.
Further, site visits were made to excellent cases of energy-efficient buildings and energy-efficient heat supply plants located in the Tokyo Metropolitan area.

On the final day of the training, the Russian side announced activity plans which referenced the information acquired from this training for formulating building energy conservation policies going forward. In addition, the following opinions were expressed by the trainees.

1) The energy conservation design standards in the Japanese cold weather regions and the energy-efficient building site visits were extremely helpful.

2) The heat supply plants, which utilized state-of-the-art technologies, were also helpful for the Russian systems.

Future plans will be investigated while referring to the opinions described above.