Under the instruction and financial support of the Ministry of Economy, Trade and Industry (METI), the Energy Conservation Center, Japan (ECCJ) gave an explanation of the current fiscal year’s ASEAN-JAPAN Energy Efficiency Partnership (AJEEP) project plan and activity details and held discussions with each country regarding the current fiscal year’s project implementation details at an Inception Meeting held in Hanoi, Vietnam during the two-day period of July 31 and August 1, 2018.

(1) Scheme 2 will continue the third year of a four-year project for training qualified energy managers and introducing energy conservation guidelines.

(3) Formulation of energy-efficient building standards and the ASEAN awards criteria will be proposed and decided at training to be held in Japan.

Opening speeches (by the host country (Vietnam), Japan, and the ASEAN Centre for Energy (ACE)) 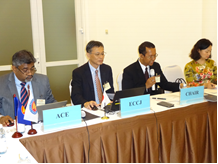 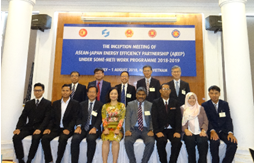 A meeting was held in Hanoi, Vietnam for developing the specific activity implementation plans of the “FY2018 Energy Conservation Capacity Building Program for ASEAN Countries”. The meeting realized participation by the representatives (the Focal Points or their proxies) of the ASEAN Energy Efficiency & Conservation Sub-sector Network (EE&C-SSN) from the various ASEAN countries (representatives of four of the countries did not attend) and from the ACE, and the implementation plans of the current fiscal year were decided.

(1) Regarding the Scheme 2 Qualified Energy Manager Training Project contents, evaluations of the previous fiscal year’s results were made by each country, and approval was given to continue the program for the third successive year. Additionally, ECCJ made proposals regarding the approach for the period following the completion of the project two years afterwards, and it was determined to start discussions during the next training in Japan.

(2) Regarding Scheme 3, information was shared between the persons attending from each ASEAN country regarding the progress of the energy conservation principal legislation and policy development in Cambodia and Lao PDR. Concerning the FY2018 activities of preparing S&L systems and energy management systems, ECCJ gave opinions and received approval to determine an order of priority for the implementation, targeting the Technical Working Group (TWG), which is a form of the responsibility promotion system.