Under the instruction and financial support of the Ministry of Economy, Trade and Industry (METI), the Energy Conservation Center, Japan (ECCJ) has been implementing a 3-year cooperation plan (FY2015 to FY2017) based on the following program in order to promote energy conservation in Brazil. 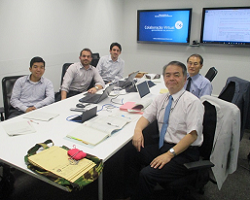 (3) Formulation and dissemination of an action guidebook for power saving and power peak shaving
The ECCJ dispatched experts from Nov. 13 to 17, 2017 to confirm the progress status of activities toward completion of the project and implement support activities. 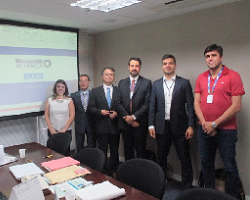 (2) Concerning formulation of the energy management system and preparation of the energy management promotion support system, the ECCJ confirmed the activity status of a working group consisting of the officials of the federal government agencies and the Sao Paulo state government, gave advice on study details, and prepared and discussed a draft guide for documenting a final proposal.
In addition to scheduled preparation of an improvement proposal document for these energy management system and energy conservation support measures by the end of the year, we also discussed a roadmap for legislation by the Brazilian government from the next year and confirmed its preparation by the end of the year.

(3) Concerning formulation and dissemination of the action guidebook for power saving and power peak shaving, we confirmed the progress of a draft with working group members including the government officials. The action guidebook will be completed in January 2018, giving priority to an industrial sector and including the user-friendly information particularly intended for small- and medium-sized businesses. We also confirmed a policy with the Ministry of Industry, Foreign Trade and Services to use and evaluate this action guidebook through cooperation of 300 participant companies of a productivity improvement program currently operated by the National Service for Industrial Training (Servico Nacional de Aprendizagem Industrial: SENAI).